Rust Hulks is a tabletop roleplaying game about playing space truckers in a grimy science-fiction future.

In Rust Hulks, you will play as the crew of a large, derelict spaceship. You will fly around the solar system picking up jobs, earning credits, scraping through hulks, improving your skills, and expanding your ship. On its face, it's simple; in practice, it gets messy fast: You're aboard a flying scrapheap halfway to Mars and three of your fuel canisters blow; the crew, while tentative friends, are mostly here for money—when things go real south, what will you do?

The game is, at its core, about going through highly tense and stressful situations as a group, and examining the relationships that form and break because of it.

Rust Hulks is like Alien. Or Firefly. Or some parts of Star Wars. Everything is used, rusty, and worn-down. Your ship is cannibalized from a dozen other ships and tweaked or patched with every piece of junk and scrap you can find. It's really less a singular ship than it is a collection of individual rooms, held together with shoestrings and chewing gum. There are no laser blasters, no energy shields, and no gleaming computers. Instead, there are wooden crates, canned rations, and radar scanners. Your computers are little more than fancy calculators, your ship is armored with scrap metal, and your guns spit hot lead.

The world is always dirty, usually decrepit, and often desperate.

As you play, you'll build and break relationships, run dangerous and risky jobs, modify and upgrade your ship, and slowly build up your supply of credits. The game is built to be fast and straightforward to run: after a quick character and ship creation, there are moves to get you into the action immediately. The focus is on a fluid, intense narrative rather than number-crunching or optimization. You can sit down to play Rust Hulks for the first time, and by the end of the session, you'll have characters, a ship, some messy relationships, and your first job under your belt.

Good luck out there, among the hulks. You'll need it.

Rust Hulks is a Powered by the Apocalypse game; to play, you'll need playbooks and movesheets, which you can download for free (itch lists them as a demo, but really they're just the stuff you'll want to print out).

If you want to order a physical copy of the book, you can get one at DriveThruRPG.

In order to download this game you must purchase it at or above the minimum price of $14 USD. You will get access to the following files: 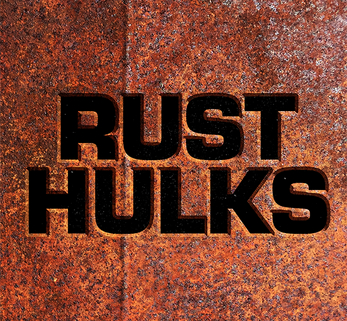